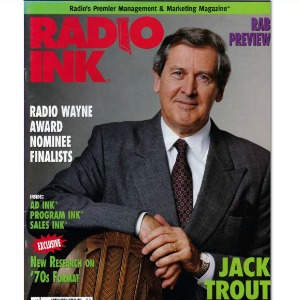 Jack Trout on the cover of Radio Ink

(By Buzz Knight) Jack Trout was a giant figure in the world of branding and positioning. He recently died at the age of 82.

In fact, without him and his former partner Al Ries, there would be no such thing as the terms “branding” and “positioning.” His influence on our thinking as marketers and strategists has been around since 1969 when he first used the term “positioning,” a concept more vital today than ever.

Those of us in the audio content delivery business would not refer to our radio stations as “brands” if it wasn’t for Jack Trout. When we sit in conference rooms throughout the country and scheme about how to create a winning strategy, we always ask ourselves about “product differentiation.” That is because of Ries and Trout.

Jack championed the “22 Immutable Laws of Marketing.” His work had an

imprint on an endless list of big brands, such as IBM, Intel, Papa John’s Pizza, HP, Eli Lilly, and more. I had the incredible privilege to be in Jack’s company on a several occasions. He was a larger than life figure in person. Jack was genuinely nice and but also brash and bold in the way he delivered his message.

For a message to break through the clutter of messages, would you expect it any other way from him?

The first time I met Jack was when we brought him in for a managers meeting over a dozen years ago. We all felt like we were in the presence of greatness — our business equivalent of someone in the stature and style of Ted Williams. Yet, I’ll bet that Jack Trout’s batting average for advertising and branding campaigns way exceeded Ted’s legendary .406 batting average. Jack wowed us with stories of the Mad Men era as he also communicated his methods and missions around “positioning.” Years later we would hire Jack for a project in Philadelphia, which produced another unforgettable “rock star” experience with him.

At that time, you were allowed the option of Jack coming to your location or going to his home office for your day meeting, and we opted to go to Jack. There we were in his home, with his work study/conference room acting as our war room for strategic planning.

It was a surreal and exciting experience that really got the adrenaline pumping. I’ll never forget how Jack started the meeting by ordering us to “shut off your phones and put your devices away” before we started.

Jack was not a fan of the then “new technology.” He was the first person I remember actually recognizing “device addiction” and how it often hampers the strategic thought process. I remember him saying “you can live without being connected on your devices while we are meeting. Besides aren’t we here to actually THINK?” Classic Jack Trout!

One thing I loved most about Jack was how generous he was on a regular basis, years later. There were many occasions I reached back to him for a quick opinion on something or to provide a quote for an article I was writing.

Back in December of 2010, as I was preparing an article on my visit to the Consumer Electronics Show, I reached out to Jack for a comment on this new radio platform delivery system called a cellphone.

This was a new phenomenon that we, as an industry, were trying to get our arms around, and we were challenged with how to clearly position this to our audience. In brilliant Jack Trout form, he replied, “turn your phone into a portable radio” as the proper messaging to our listeners.

There it was, in its simplest form. It turned out serving us for many years as a piece of imaging production on many of our radio brands.

One of the many things Jack taught us was how positioning is so much about building perceptions, particularly around the leadership position in the mind of the consumer. Jack Trout built that perception by his actions and his wisdom. His writings will live on and for that we should all be grateful.